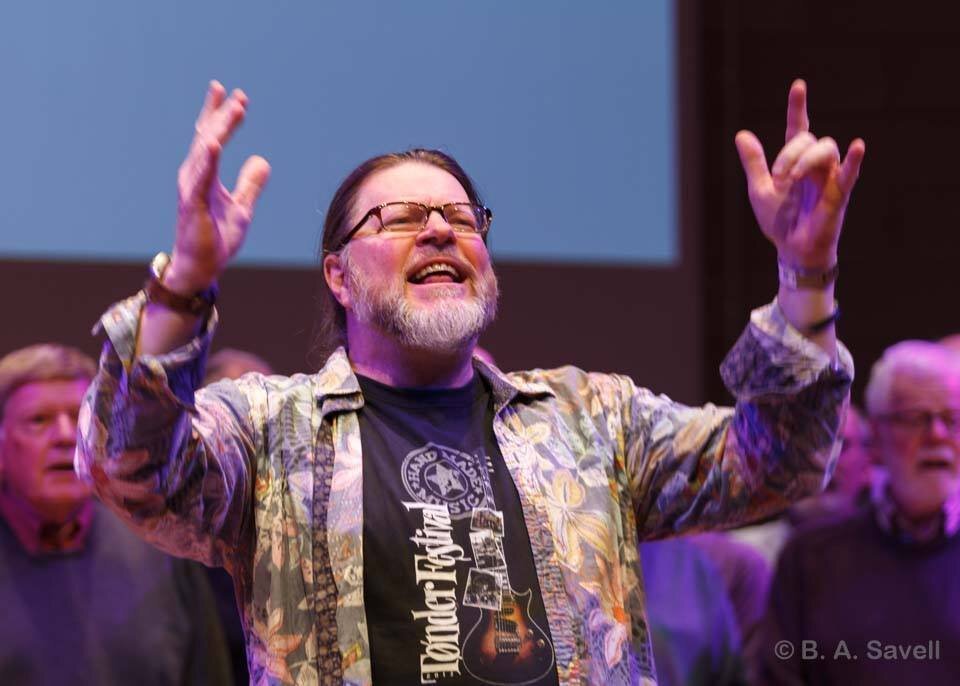 We’ve got a seasonal treat for you with TWO Christmas themed workshops from the wonderful Chris Samuel. You can book them individually, or both for double the fun. They’re on Thursday 25th November and  Thursday 2nd December, 7.30pm to 9.30pm.  The workshops are open to all, as with the rest of our Autumn programme.

Chris Samuel is a community choir leader and performer based in Bradford on Avon. He’s steeped in a cappella singing and runs mixed community choirs in Wiltshire who come together to perform as the mighty Wiltshire Wailers and also leads The Magnificent AKs (probably the best all bloke singing group ever to come from a small village near Cirencester).

He’s performed with Edinburgh award winners Naked Voices and, since 2007 has toured the UK and Europe with Aussie festival favourites The Spooky Men’s Chorale and their UK subset, A Fistful of Spookies as well as vocal trio The Croutons, who have just started performing again after a five year hiatus.

He has a long association with Sing for Water, conducting and taking choirs to the London events as well as co-founding Sing for Water West, a mass charity concert in Bristol which ran for ten years, attracted choirs of over 1,000 and raised nearly £250,000 for WaterAid.

He is currently co-chair of the Trustees Board of the Natural Voice Network, and is passionate about the work of the Network in encouraging more, open-access singing groups across the UK and beyond.

Chris sincerely believes that not only can everybody sing, but pretty much everybody should. It’s good for your mental and physical health, a lot of fun and is calorie free – and singers are some of the nicest people you could ever hang out with.

Above all else, he considers himself a very lucky man.

This is what Chris says about his two workshops:

Most of us have sung the same songs at Christmas since we can remember. They’re constant, never-changing and… perhaps just a teensy bit boring?

But for every set of standard Christmas Carols, there are a vast number of different tunes for the words we all know (some reckon on at least 400 different tunes to ‘While Shepherds Watched’). There are also a huge number of ‘lost’ Carols from all over the country, lots of them with absolutely belting tunes.

Along with local folk singers, and with the assistance of a ‘Folk Orchestra’, Chris has been leading ‘Traditional Village Carols’ in the pubs of Bradford for the last decade. Our starting point was the Carol Singing in South Yorkshire and North Derbyshire pubs, which have done so much to keep the flame alive, but over the years we’ve discovered more, beautiful carols closer to home in the West Country to add to the genre.

Over the two sessions at the end of this term, Chris will be sharing some of his favourites from the last ten years.

By: People of Note

Register as a Customer and you can autofill your forms and view all your registered events.

Send me an Email